Burning Man, the annual desert art and community spectacle, created a recipe for life-changing, consciousness-opening travel experiences. And like any good recipe, it’s yours to borrow, remix, and update to suit your tastes.

Burning Man has grown from a small San Francisco beach gathering in 1986 to a phenomenon attracting thousands. But it still holds tightly to its principles including ‘leaving no trace’ and ‘radical self-expression.’ And, yes, it still burns a giant effigy of a man.

Whatever your thoughts on attending Burning Man, we admire the spirit of the event. If you can’t make the trek this month out to Black Rock City in Nevada, here are five quick ways to make your own Burning Man, wherever you are. 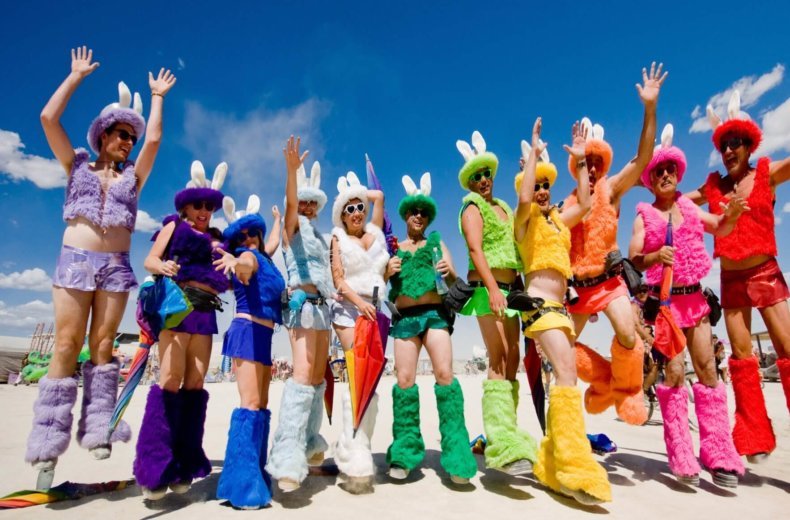 1. Get Way Out There

If you want to recreate society from scratch, the best way to start is to get far away from the modern world. This is easier than you might think, particularly in the Western USA: dispersed camping is free on hundreds of millions of acres of public land, including Bureau of Land Management (BLM) properties, National Forests, and many state lands as well. Snag your own slice of empty desert in the remote and often overlooked Alvord Desert of eastern Oregon, or find your own grove in the quiet forests of the Modoc Plateau in California’s emptiest corner.

“We use self-expression to create a sense of community… It’s not enough to simply express yourself. That expression should take the form of a gift. It is meant to be shared,” said Burning Man co-founder Larry Harvey. People who go to Burning Man prepare well in advance, creating sculptures and interactives to lug out to the desert, or planning what to do live on the spot. You may have a smaller audience, but try to create something that can be enjoyed or used by all.

It’s no coincidence that Burning Man happens each year in Black Rock City, a place of intense heat, full exposure, dust storms and corrosive alkaline dust, instead of, say, a pleasant, forested camp by a babbling creek. In the face of extremes, communal effort becomes essential, and gifting takes on new level of significance. Embrace the extremes, while coming prepared – and prepared to aid your fellow traveler. There’s no rule that says deserts are a must: try wet rainforests, long treks to high elevations, or snow camping. Hey, maybe you can build and then melt a giant ice yeti? 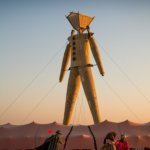 At the first Burning Man in 1986, one moment stuck with Larry Harvey. “Before I knew it I looked over and there was a hippie with his pants on his head and a guitar standing there, materialized out of the murk,” said Harvey.

Their gathering and their flaming creation attracted others, and they were welcomed. Take this spirit on the road: it can be as simple as offering a beer to a neighboring camper, or inviting them over to join the festivities, even if their pants are just on their boring old legs.

5. Embrace Ritual (aka Build a Man to Burn)

The man himself has grown from a crude eight-foot effigy to a massive, complex creation in an over 100-foot-high structure, but the ritual of Burning Man has remained essentially the same. It may seem like holy writ, but the ritual’s roots are fairly mundane from the account of Larry Harvey: “I called up a friend and I said, ‘Let’s… let’s burn a man, Jerry.’ And he asked me to repeat that statement.”

Build your own man and burn it (safely please: there are many how-tos online from people who have learned from past mistakes), or create your own ritual – this is supposed to be about self-expression, right?

Disclaimer: If all this seems too hard, forget it and just go.

Ask anyone who’s been, and they’ll tell you the same thing: everyone’s Burning Man experience is their own. Going to Burning Man is a DIY experience. So go ahead: we won’t judge. You can always try the giant ice yeti thing next year.

Andy Murdock is a travel writer with an indecent fondness for ferns and no experience in burning effigies. He lives in Alameda, California.

The Next Big Thing: Cambodian Food