In 1925, two literary icons take a wild goose chase across the French countryside. They miss their meet-up. They dodge rain in a topless car. They drink too much wine. One even swears he’s dying. And yet this drive from Lyon to Paris by Ernest Hemingway and F Scott Fitzgerald clearly marks a Great French Road Trip. You should follow them. (Especially if you like chicken.)

Ernest Hemingway’s posthumous memoir A Moveable Feast is a gift. The heart of it relives 1920s Paris, but it’s best when Ernest leaves town. F Scott Fitzgerald’s new book, The Great Gatsby, is just out, and Ernest hasn’t read it yet. When they meet, Fitzgerald asks for help driving his deformed car back from Lyon to Paris, and Ernest agrees. Then things get weird.

Fitzgerald shows up late in Lyon, already drunk in the morning. They pack a picnic, get in a car with a ripped-off roof, and take two rainy days to drive the backroads of Burgundy, stopping for a night in the small river town of Chalon-Sur-Saône. There, Fitzgerald is feverish, thinks he’s dying, and demands a thermometer. He falls asleep during dinner before rebounding as if nothing’s happened. By then, Ernest is already sick of “this silly comedy,” blaming himself mostly, and declares “never to go on trips with anyone you do not love.”

Yet once back in Paris, he finally reads The Great Gatsby. Hemingway is floored. He likens Fitzgerald’s genius to the “dust on a butterfly’s wings” and sweetly vows to do anything to help his tortured “frenemy” stay clear of his demons and follow his skill. It’s hilarious. And touching.

“It's a designer motherfucking chicken.”

One thing the writers agreed on is what to eat. Let’s talk about that.

Celebrated for over four centuries, the poulet de Bresse is considered the “Dom Perignon of chicken.” Over a million are raised every year in a 25- by 60-mile “elite chicken zone” just east of the best Burgundy wineries (most chickens never leave France: only one in five are exported). The chickens have steel blue feet, pure white plumage and a bright red crest, thus resembling the French flag (coincidentally?). Regulations require each chicken is raised with the space of a New York studio apartment (a whopping 107 square feet per chicken). Since 1957, these pampered chickens have been awarded, like a fine wine, with the appellation d’origine contrôlée (AOC) status.

So when you’re in France, you order poulet de Bresse à la crème.

This famed dish is made of chicken legs and breast cooked in a pan with heaps of butter, sliced mushrooms, onion, crushed garlic, various herbs – and a glass of white wine poured in, too. The meat is a bit tangy and sweet, and firmer than your average nugget.

Following Hemingway and Fitzgerald takes you off the A6 autoroute, which makes the 285-mile trip from Lyon to Paris in under five hours. Before you head out, Lyon is worth exploring, as it’s considered the gastronomic capital of France.

Lyon is also home to the biennial Bocuse d’Or, sort of the World Cup of cuisines with four dozen nations competing. Its namesake, Paul Bocuse (who had a Bresse chicken tattoo), died earlier this year at age 91, but his legacy lives on in several restaurants and a cooking school.

American writer Bill Buford relocated to Lyon for five years to learn to be a chef (he’s been working on his book about it, Dirt, for several years more). He says the secret to food in Lyon is lunch. “Simple, never fancy, like the food you wish your mother had cooked,” as he wrote for the Guardian. “And so cheap that, even with wine, even with a lot of wine, even with a ridiculous amount of wine, you’ll stare at the bill looking for the mistake.”

Where to go in Lyon? “Anywhere. Everywhere.” So do that.

Lyon’s famed bouchons – rustic taverns – are a good place for Bresse chicken (Café des Fédérations is a classic). But this is a road trip, so get out of town.

The journey begins northeast of Lyon, where you’ll find four “chicken villages” in the heart of chicken country. The best time to come is mid-December, during the annual Les Glorieuses (the Glorious), a chicken festival shared by the villages on consecutive days (this year, December 14-18). It begins in Bourg-en-Bresse, where postcards champion the chicken, then goes on to Montrevel-en-Bresse, Pont de Vaux and Louhans.

During the event, two vast halls are filled with farmers, vintners, city types dressed rustic chic – and lots of chickens live and butchered. In French Lessons, British writer Peter Mayle describes the “row upon orderly row of immaculate corpses” in one hall, all decorated in white muslin robes. Uniquely, heads and claws are left intact on the butchered meats. “No mummy of Egypt,” Mayle writes, “could have been more elegantly prepared.”

Then, west of the autoroute and Saône River, the drive turns to wine in the low-lying hills filled with rows of grapevines of Burgundy. Hemingway and Fitzgerald overnighted at Chalon-Su-Saône, where they had just unknowingly passed the spot where, in 1826 or 1827, Nicéphore Niépce took the oldest surviving photo. You can learn more about the photo (“View from the Window at Le Gras”) at a museum on his estate, just south of town. It’s possible they stayed in the building now home to Le Saint Georges Hotel, by the train station. (The manager has no record of their visit.)

To the north, follow the Route des Grand Crus. It is France’s oldest wine route (dating to 1937), passing 37 wine-making villages between Beaune and Dijon – exactly the territory these drinkers would be delighted by. From there they raced to Paris. You should go slow.

Robert Reid is Modern Adventure’s managing editor. He has not driven a topless car in France to eat chicken, but he has walked Languedoc-Roussillon’s Robert Louis Stevenson Trail and drank daiquiris in Hemingway’s favorite Havana bar.

A Moveable Feast: The Menu

Hemingway sure knew how to write a book. And how to pick a wine: Ninety years later, you can still purchase most of his bottle selections in A Moveable Feast. Beside wine, if you’re looking to eat true to the story, here’s a snapshot of how Hemingway and Fitzgerald filled their bellies on their first day out.

“I was shaving in the morning getting ready to go out for breakfast when they called from the hotel desk saying a gentleman was downstairs to see me. 'Ask him to come up, please,' I said and went on shaving. Scott did not come up and I met him down at the desk. 'Let’s get some breakfast and find the car and roll,' I said. It was a big American breakfast of ham and eggs and it was very good.”

“Excellent truffled roast chicken,” with bread and white Mâcon wine, as packed by their Lyon hotel. “Scott” – as Hemingway called Fitzgerald – “was very happy when we drank the white Mâconnais at each of our stops.” These wines – from Mâcon, 45 miles north of Lyon – are a common pre-dinner choice, often paired with salty snacks like olives. Traditionally seen as a quality low-cost wine, they’ve had a surge in quality lately (chiefly those from Mâcon-Villages) and are generally seen as an entry to Burgundy whites at a reasonable cost.

Burgundy snails (harvested April to June), cooked in butter, with a carafe of Fleurie (a Beaujolais red). When Fitzgerald stepped away, Hemingway ate his snails, "dipping up the butter, garlic and parsley sauce with broken bits of bread." For a quick tasting, Beaune's Hélice-L’Escargotier is a snail shop with wine. Poularde de Bresse (a heavier Bresse chicken), a bottle of Montagny. Hemingway found this rustic wine a “light, pleasant white wine of the neighborhood.” Though after a sip or two, Fitzgerald “passed out at the table with his head on his hands.” Go easy. 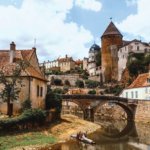 Burgundy on your mind? Then join us this May, for one week of exploring Burgundy with an Oregon wine pioneer, David Adelsheim. We’ll get VIP access to his wine-making friends’ tasting rooms and take in the countryside on truffle hunts and hot-air balloon rides.