In 2006, Frank Koughan and his wife relocated from the USA to the highland city of Querétaro, Mexico. Over the years, Frank has learned a lot about the differences between the two countries. Including how, in the nearly five hundred Decembers since Spanish conquistadors introduced Christianity, Feliz Navidad has become a much different deal than Merry Christmas. 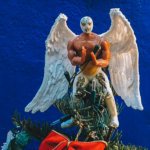 1. Mexico has 53 days of Christmas

The Christmas season here is better known as the “Guadalupe-Reyes Marathon” (seriously), running from the feast of Mexico’s patron saint, the Virgin of Guadalupe (December 12) to Three Kings Day (January 6). That’s a solid twenty-six days of Christmas. But Three Kings Day done right involves the consumption of a traditional cake called rosca de reyes, with a little plastic baby hidden in it. Whoever gets the piece with the baby has to cook (okay, buy) tamales on February 2, and bring the baby from the family’s nativity scene to church to be blessed – adding a bonus twenty-seven days to the season.

With its monomaniacal focus on a single day, American Christmas can be pretty stressful. But Mexicans have their family gatherings on Christmas Eve (Noche Buena) and Three Kings Day, leaving December 25 as kind of an anti-climax. Stores and businesses are open. Churches hold masses as usual. In Querétaro, the biggest signs of a celebration are the traditional Christmas Day bullfight and the traditional Christmas Day sixteen-man, steel-cage lucha libre wrestling match.

3. There’s no wrong way to do a Nativity scene

Though the separation of church and state was reinforced by both a civil war and a revolution, sprawling nacimientos, or nativity scenes, are erected in the public squares of every city and town in Mexico. Many have apparently been designed by people versed in neither the Bible nor zoology. Here in Querétaro, I’ve seen the Christ child attended by a zebra, an alligator, a pair of White Pekin ducks, a giraffe, and several figurines clad in Mexican indigenous garb – one of whom is selling dried beef from a cart. Noah’s Ark, Satan and an aerobically-toned Adam and Eve make appearances as well.

4. Santa’s the figurehead, but the Kings hold the power

Santa Claus is increasingly ubiquitous as a symbol of the season, but Los Reyes Magos (the Three Kings) are still the ones who bring the bling. Because the Bible shows at least two of them to be lousy gift-givers (gold is always cool), children write out shopping lists for them, which are then tied to helium balloons and set aloft. How this environmentally disastrous flotilla of lists is expected to arrive in the hands of one of the Kings is a mystery on par with the Virgin Birth, and possibly explains why Mexican children don’t get their gifts until January 6. 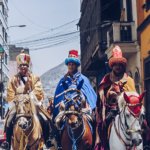 5. Christmas carols can get a bit snippy

On the nine nights leading up to Christmas Eve, Mexicans stage posadas, in which groups of neighbors gather outside a house and, evoking Mary and Joseph, sing a song begging for shelter. The occupants of the house – true to the well-known tale – reply with the musical equivalent of “get lost.” This goes on for several verses until the occupants realize the visitors are important, and finally relent, bringing them in for a full-on piñata party.

6. You can mine the dark past for laughs (at children’s expense)

In case the Christmas season isn’t festive enough, Mexicans throw an April Fools Day into the middle of it. Día de los Inocentes (December 28) commemorates the day the Bible’s Original Pranksta, King Herod, who ordered the slaughter of every male baby in Greater Bethlehem. I admit, I still don’t see what the joke was there, but because “innocent” and “naïve” are the same word in Spanish, the day is now devoted to duping the unsuspecting. Apparently you can’t spell “Messiah’s birth” without m-i-r-t-h. 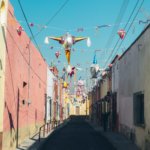 Poinsettias – known as flor de noche buena (the Christmas Eve flower) – are native to Mexico, as the American diplomat Joel Robert Poinsett discovered when he arrived as the first American ambassador to Mexico in 1822. In a hint of how this relation would go over the coming centuries, Poinsett swiped the nochebuenas he saw in Nativity display in Cuernavaca, sent cuttings back to friends in the US, and renamed the plant after himself. (A Mexican lizard also carries his name.) A California horticulturalist later bred a more attractive version, which he patented, leading to a poinsettia cartel so powerful even Mexicans have been forced to buy American seeds. In the US, the date of Poinsett’s death is officially National Poinsettia Day. Of course this is on December 12, the start of the Maratón Guadalupe-Reyes.

Frank Koughan is a journalist and documentary filmmaker from New York who, in the midst of a late-30s midlife crisis, moved to Querétaro with his wife and dog for a one-year vacation back in 2006, and has yet to move back.

The Great Mexico Bucket List: 21 Classic Things to See & Do