Most articles we read on Kenya are done by outsiders. So we asked Lawrence Moindi, an aspiring writer we met a few years ago, to explore his home, Nairobi... like a tourist. He found some things he never knew about. And one thing nearly all visitors miss.

Traditionally not many Kenyans ever see much of our beautiful country. But five years ago, the country launched Tembea Kenya, which means “Tour Kenya,” an initiative to lower travel expenses and awaken more Kenyans to travel around our beloved Kenya. Now there’s a growing awareness of local destinations, particularly amongst millennials who travel more.

My travels in Kenya have definitely shaped my view of my homeland. And I’m lucky in that I started earlier than most. My dad used to work at a Mombasa beach hotel, and we befriended some German guests who’d take us on trips. I remember seeing the “Big Five” animals at Tsavo National Park. I also got to visit the Haller Park at Bamburi’s forest rehabilitation center, where I couldn’t help but marvel at the size and aggression of crocodiles at feeding time. I got to sit on tortoises and take photos with a snake. I had never been that scared and thrilled! I always had lots of stories to tell my friends after the holidays.

A few years ago, I met Modern Adventure’s managing editor, Robert Reid, outside Fort Jesus in Mombasa. And now he’s asked me to be the travel writer – to explore my home like a tourist. So over a few days I’ve explored Nairobi like a foreign tourist, learning things I did not know – and finishing with one thing almost all foreign visitors miss.

“The air is fresh and calm. I love the periwinkle sky and the lush vegetation... What a lovely day to be mauled by a lion!”

I’m asking a middle-aged lady officer at the gate of the David Sheldrick Wildlife Trust. She looks annoyed, and points to a lonely road ahead of me. The trust, where rescued baby elephants are fed at 11am daily, is a kilometer ahead.

I walk off, but keep looking back hoping I’ll see another adventurer. I stare deeply into the woods and up to the sky. I take a deep breath and keep walking, hearing birds tweet and a soft fluttering of leaves along the serene path. The air is very fresh and calm. I love the periwinkle sky and the lush vegetation.

What a lovely day to be mauled by a lion!

The David Sheldrick Wildlife Trust uses fees and donations to nurture baby elephants in need until they mature enough to let loose in the wild. Visiting is quite a thrill. I had never seen such a level of elephant-human interaction. I enjoyed seeing baby elephants being fed from milk bottles, but was more surprised by the number of foreign tourists at the center. There were only a few locals. (Then again, why the shock? I had never heard about it before myself.) 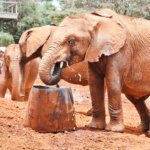 Next, I visited the Giraffe Centre in the suburb of Karen. Kenyans are charged roughly $3 here (cheaper than the trust’s $5 fee). Such is not a small amount in a country where many people still live under $2 a day.

Like at the elephant center, there were lots of foreigners who were very excited about feeding the giraffes and taking selfies. I spoke with the attendant, who was very hospitable, but was honestly disturbed that so few Kenyans visit such a terrific place. These places need to be advertised more widely within Kenya.

Before this project, I had never heard of the Karen Blixen House. Karen, the Danish author of Out of Africa, lived there from 1917 to 1931. So, before going, I watched the film version, starring Meryl Streep and Robert Redford. It’s been a really long time since I felt that connected to a film. 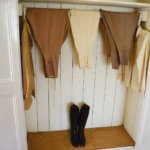 First, seeing such a great movie shot in my country surprised me – to see beautiful scenes like Lake Nakuru (home to millions of flamingos) and Mt Longonot, where I had gone hiking just two months before. It was quite a time-travel experience to see Kikuyu elders dressed in animal hides too. It made think about how much change has taken place in Kenya over the years – from walking barefoot to suits and ties. It is a great transformation, but I also appreciated that there was life and culture here before we interacted with the Western cultures.

“Have you seen the movie Out of Africa?,” my guide at the Karen Blixen house asked.

Knowing I had done my homework well, I was excited to say “yes” and to tell him that unfortunately it wasn’t until recently that I got to hear about it.

“I’m not surprised at all because many Kenyans haven’t heard about the house. Both the book and movie were released many years ago and there hasn’t been any recent promotion of both works,” he said. “Almost all the visitors that come here from abroad have read the book or watched the movie.”

My charming guide led me through interiors of the house. Although I’m from a different generation, I love Streep; her role as Karen filled me with awe. Despite being disappointed in her marriage, Karen is depicted as a valiant soul that fought for her dreams and defended her desire to see her African workers empowered through education. She saw the bigger picture by championing for the education of African children, perhaps as a means to their emancipation. I’m disappointed that such a beautiful story isn’t part of Kenyan history courses. Our history classes mostly focus on post-colonial history, thus denying us the chance to learn about such a colonial heroine.

I thought a tour of Nairobi cannot be complete without going to Africa’s largest slum – Kibera. I visited particularly to see and understand why many wazungu (as we call white people in Swahili) visit the place. To be honest, I was quite wary. Growing up I have always been told that Kibera is a dangerous place where you can be robbed in daylight. Also, I had been skeptical about “slum tourism.” I wondered why people would go, what is so interesting about seeing people living in poverty? I thought such visits merely offered a chance for a photo opp for social media.

But my interaction with the Boda Boda (commercial motorcycle) riders and several women selling foodstuffs by the roads was quite nice. The people are warm and friendly. And everyone I talked to in Kibera had positive things to say about the “slum tourists.” Even those who don’t meet tourists. “I haven’t directly interacted with the tourists,” a lady operating a food stand told me. “But I know some of them have put up a health facility at Kamukunji Center. They have also helped locals get access to safe fresh water…” 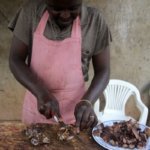 This visit completely shifted my perspective about “slum tourists.” Indeed, life in Kibera can be quite dismal. Though the people were friendly, I could see a clear suffering and lack of hope in many. From scars on their faces to tattered clothes, one can tell that life is hard in the neighborhood. Any volunteer or donor work has to be appreciated. Now, I think visiting Kibera is very important. It is one thing to imagine that life is hard in the slum, but going there gets to move your heart to action.

I wound up my local tour by indulging in our most cherished food — nyama choma (roasted goat meat). Although Kenyans are curious about trying and embracing foreign tastes, we never abandon our own culinary traditions. This delicacy has become more of a cultural celebration than just food, usually reserved for weekends, celebrations or fun days.

Good nyama choma is prepared by marinading the sliced, fresh goat meat in lemon juice, garlic and other traditional spices for about an hour, then putting it on a direct flame, usually from charcoal. It’s cooked a few turns until the outside fat is fully rendered.

The best places to have Choma are in Ongata Rongai and (my recent favorite) Kamakis along Nairobi’s Eastern Bypass in the suburb of Ruiru. Both places are about 20 kilometers outside the city center. Here, you will find many bars with an open facade and large open kitchens where smoky meat sizzles to catch your attention. These aren’t fancy places, but who cares? When you’re there, you just want to have the meat.

The meat vendors were very vigorous. They’ll slice off a sample for you to try, and most are not hesitant to discredit their neighbor’s offering. To say I was spoilt for choice is an understatement!

Lawrence Moindi is an academic and business writer based in Nairobi, Kenya. This is his first travel article.

“Home” isn't just where the heart is. It's something more personal.

Why the Travel Industry Needs More B Corps